Further to the news bulletin dated 08/03/07, Birkin SA and Birkin Sportscars Australia have conducted extensive investigations into the failures of uprights on a PRB supplied IRS car while also reviewing performance of the uprights in a number of other Birkin S3’s, both in Australia and South Africa.  The summary of these investigations is:

Birkin SA is strongly of the view that the uprights as supplied are more than adequate for intended road usage.  They were designed using FEA to maximise strength while minimising weight.  However, owners are reminded that components cannot be warranted for race usage because of the extreme and unknown nature of the loads that may occur.

Bearing in mind the critical nature of these components, Birkin SA has produced a heavy duty upgrade for the uprights.  This consists of a steel plate which is bolted to the bottom horizontal flange of the upright, while securing the main ball joint.  This component is being fitted as standard to all new uprights and will be provided free of charge to existing owners where required.  The fitting of these plates requires machining of the existing uprights which must be undertaken by Meridian Motorsport for a fixed fee of $290 inc GST, plus shipping.  Uprights will be provided on an exchange basis. 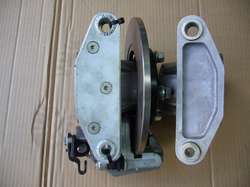